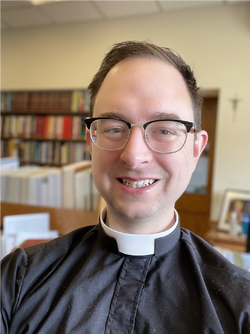 The Rev. Dr. Chris Corbin, Rector
Fr. Corbin grew up in Florida, the son of a United Methodist minister.  He is a graduate of Florida Southern College, Yale Divinity School, and Vanderbilt University. Before his call to Trinity in March 2021, he served as Canon to the Ordinary, Communications Director, and Director of the Niobrara School for Ministry for the Diocese of South Dakota. He is a founding editor of the web blog
Earth & Altar.

His wife, The Rev. Portia Corbin, is also a priest and has been called to serve at St. John's, New London. The Corbins are the proud parents of two daughters. Their family also includes three beloved cats. In his spare time, Fr. Corbin enjoys woodworking and cartoon animation.

Deacon Sandy has been a member of Trinity since 1969. She is married to Samuel and have three adult children - Suzann, Serah and Sam II.  She has two grand-children - Yancy and Madeline. Sandy came to Oshkosh to attend school, where she met her husband and was married at Trinity. She worked at the University of Wisconsin – Oshkosh for 35 years, retiring in 2008.  After retiring, Sandy attended the Diocese of Fond du Lac’s Deacon School, and was ordained in 2011. Sandy has been active in the Diocese serving on The Commission on Ministry, the Standing Committee, and the Finance  Committee. She served as a Deputy to General Convention in 2003 and 2006.

At Trinity she has been a member of the choir, Altar Guild, Stephen Minister, and Pastoral Care, as well as serving on Vestries and as a Senior Warden. As a Deacon, Sandy serves every other Sunday at Liturgies, and the main emphasis of her ministry is Pastoral Care. Sandy enjoys traveling, baking, entertaining and being entertained by her two cats, Esther and Whiskers.

The Rectors of Trinity